First Time on a Hog

As I posted earlier, my girlfriend and I planned a recent vacation to Santa Fe, New Mexico around renting a Harley Davidson Road King from Chicks Harley in Albuquerque, NM. Well, we just got back from vacation yesterday and I have to report that riding the Road King for 3 days really wowed me.

I currently own a Triumph Sprint RS, and I’ve ridden sportbikes almost exclusively with the exception of the Suzuki DR I used during my MSF and the Triumph Speedmaster I got to try out at Martin’s Motorsports during their last Triumph Demo Day. 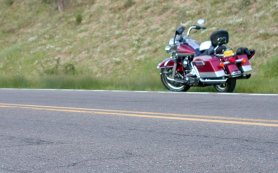 So, on to the review. After showing up at Chicks just before they opened last Saturday morning and working through some insurance and rental paperwork, the bike was ready for me. I was particularly impressed that they performed a full safety inspection on the bike and washed it to a nice shine before wheeling it out to me. Nicole and I chose some helmets from their rental selection and we were ready to ride.

The rental guy went through the controls with me, and I was thankful that he spent the time as I would have never figured out the hidden ignition or the heel and toe shifter without having a quick explanation. Once he was done explaining the bikes features to me he wanted to see me make a quick loop around their lot before leaving so he could make sure I was going to be okay on it. Well, after starting it up and shifting it into first, I got my first taste of the Harley experience when I went to lift the bike off of its sidestand.

At around 800 lbs in weight, the King isn’t so easy to get vertical from a standstill. But, once you get the hang of it its not too bad. Letting out the stiff clutch and starting off I found that I had to give the King a fair amount of throttle in first gear to get started without stalling. As soon as you twist that throttle the vibration sure kicks up a notch. Just idling the bike shakes and bakes a little but given a little gas things really get moving, both forward and side to side as the big V starts kicking.

My first loop through the lot was pretty scary as I had a lot of trouble getting used to the weight at slow speed and slow turn in response. However, once I got used to the lower center of gravity and the slow steering I was off, though a bit shaky still. I had 60 miles of highway 25 between the dealership and our room in Santa Fe so it was right to the fast lane to see how the Hog responded to some high speed work through the mountain desert.

Once I got a chance to open it up headed up the access ramp and I had a huge grin on my face from the mountains of torque driving the bike forward. The heel and toe shifter made upshifts a blast which was nice because you won’t be riding 65 in 2nd gear on this thing. The gear ratio is spaced out for low rpm cruising and the big pistons don’t appreciated being worked anywhere over the mid 4000 rpms so any highway level speed will require you to be riding in 4th or 5th. But, once you get up to 55-60 and beyond in 4th just twist the throttle back and you’ll be accelerating like a shot for a machine of this size.

Cruising through the desert at 80 mph with my legs out on the highway pegs I began to gain a whole new appreciation for the King. The low, wide seat was comfortable and the space between it, the highway pegs and the handlebars was perfect for a laidback, slightly slouched riding position that placed me behind the windshield out of the dry, hot windblast. The handling at high speed was very confidence inspiring as the long wheelbase and sheer weight of the bike makes it incredibly stable once you’re riding more than 25-30 mph.

After I got to Santa Fe, we loaded up the surprisingly big hardshell saddlebags with a digital camera, camcorder, a backpack with some travel books and two riding jackets and headed to for the High Road to Taos. Here came another surprise, with all the added weight of a passenger and our gear the bike felt just as powerful and the rear suspension response didn’t seem to change at all. I didn’t feel any wallowing or bottoming out even though the rear only has 2 inches of travel and was greatly impressed.

Once we hit the High Road (Rt 76 north) and its twisting, snaky course through the mountains and Kit Carson National Forest I was blown away at how this big ole cruiser took to the twisties with a fair degree of ease. Again the torquey V-Twin was the star of the show as a slight twist of the throttle was all that was necessary to keep the bike steaming through the tight uphill corners. Unlike on most sportbikes, the shifter could all but be ignored during this part of the trip as the low end torque made changing gears a choice of preference rather than necessity.

As we pulled into Taos proper the Harley factor came into play as the loud exhaust note and shiny chrome drew stares of envy and curiosity from most everyone we passed. We put about 200 miles on the bike on Saturday and went on to put another 600 miles on it in the next two days through all kinds of conditions, low speed cruising, high speed freeway hauling and more twisty mountain roads than I ever though possible. Never once did the air cooled motor lose its cool in the 90 degree heat and we rarely became uncomfortable enough to consider ditching the bike for out rental car.

After the three days I would have to say that my whole view of cruiser bikes in general and Harleys in particular has been shaken and thoroughly reformed. While I would have definitely preferred a sport bike on certain tight switchback sections of our rides, none of the sportbikes that I have ridden would have been as comfortable and carried as much gear and a passenger with such ease doing the long miles that we did. I’m quite sure that I won’t be rushing out to buy a cruiser soon, but that’s only because I’m not sure I can justify owning 2 motorcycles right now. However, when the time comes to add a second bike to the stable, I’m pretty sure that I’ll be seriously considering a touring oriented heavyweight cruiser for the pure joy of riding hundreds of miles a day with all the gear I want with my girlfriend riding in comfort behind me.